Owned by the U.S. Navy, R/V Sally Ride is operated by Scripps Institution of Oceanography under a charter agreement with the Office of Naval Research. The National Science Foundation provides additional substantial support for scientific equipment and instrumentation. Part of America’s Academic Research Fleet, Sally Ride is managed by Scripps as a shared-use research facility within the University-National Oceanographic Laboratory System (UNOLS), serving scientists and students from across the United States.

R/V Sally Ride was delivered to Scripps on 01 July 2016, following a four-year design/build process by shipbuilder Dakota Creek Industries (Anacortes, WA) and naval architect Guido Perla and Associates (Seattle, WA). Sally Ride is the second of the Navy’s Ocean AGOR class of research ships (the Neil Armstrong class). Scripps was competitively awarded the operation of AGOR 28 in May 2010, and participated in an advisory role to the construction manager (Naval Sea Systems Command) during the final design and construction. Following delivery, Sally Ride underwent shakedown and science verification activities, and was accepted by UNOLS for scientific service in the U.S. Academic Fleet on October 28, 2016. 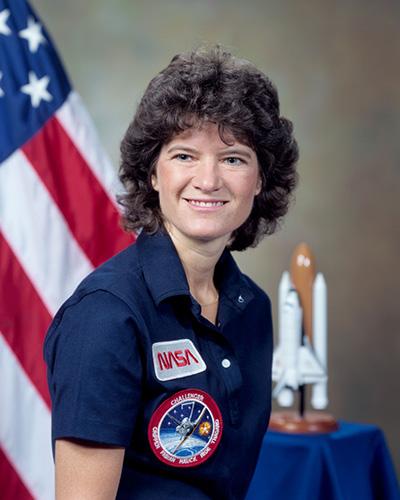 Dr. Sally K. Ride (1951-2012) was the first American woman to travel into space. She graduated from Stanford University with a B.S. in physics and a B.A. in English, and then went on to achieve an M.S. and PhD in physics while applying for the NASA shuttle program. She became one of the first six female astronauts in NASA history, and flew aboard space shuttle Challenger twice, in 1983 and 1984. After retiring, she joined the faculty at University of California San Diego as a professor in the physics department and director of the California Space Institute. In 2001 she founded Sally Ride Science, a program designed to keep kids, especially girls, interested in science. She co-authored multiple books about space aimed at children.

Her 343 hours in space inspired her life’s work to encourage learning and engagement in children, and to work to protect the planet. A quote from Sally Ride about seeing the Earth from the space shuttle - “I remember the first time that I looked towards the horizon. I saw the blackness of space, and then the bright blue Earth. And then I noticed right along the horizon it looked as if someone had taken a royal blue crayon and just traced along the Earth’s horizon. And then I realized that that blue line, that really thin royal blue line, was Earth’s atmosphere, and that was all there was of it. And it’s so clear from that perspective how fragile our existence is. It makes you appreciate how important it is to take care of that atmosphere.”

Sally Ride won many awards during her lifetime, and continues to be honored. Her life and business partner, Tam O’Shaughnessy, was named the christening sponsor of the ship and broke a bottle of champagne across her bow on August 9, 2014. The ship was handed over for operation by Scripps Institution of Oceanography on July 1, 2016.

Scripps is honored to continue Dr. Ride’s legacy aboard R/V Sally Ride, which will engage a generation of scientists in learning about our planet in order to protect it.

Owned by the U.S. Navy, R/V Sally Ride is operated by Scripps Institution of Oceanography under a charter agreement with the Office of Naval Research. Sally Ride is a shared-use research facility within the University-National Oceanographic Laboratory System (UNOLS).