Photo of the Week: Neighbors at Sea

The occasion was a rare project involving multiple Scripps research ships. FLIP, the FLoating Instrument Platform, was towed by a tugboat from Scripps' Nimitz Marine Facility in San Diego Bay to a spot north of San Clemente Island. And that's where the fun began, because FLIP then filled its ballast tanks and began sinking 300 feet of its 355-foot-length into the water as Scripps research vessel Robert Gordon Sproul stood by.

"For a moment it almost feels as though she’s going to keep going right over, but instead she starts spinning, like someone put the rudder hard over," Christian writes in a guest post on the R/V Sally Ride expedition blog. "After a couple of rotations, she settles out, and the flipping process is done. FLIP is now a tree house floating in the middle of the ocean."

FLIP switches from being a hull floating on the surface to being an ultra-stable spar buoy. For a deployment scheduled to last until April 11, FLIP is carrying a crew of eight and a variety of scientific sensors.

R/V Sally Ride is also in the region for related research and is scheduled to transfer some personnel to and from FLIP during its 26-day mission. 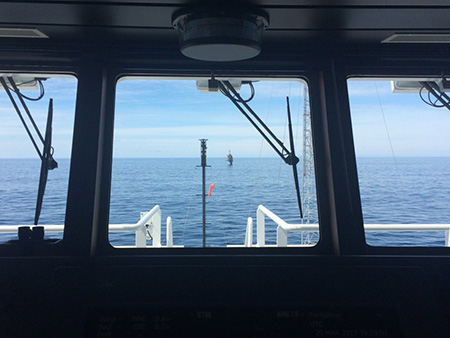 Research platform FLIP as seen from the bridge of R/V Sally Ride. Photo by Megan Cimino. 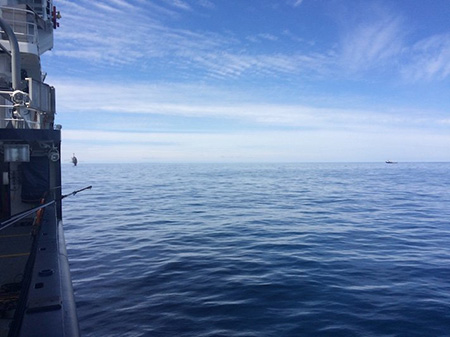 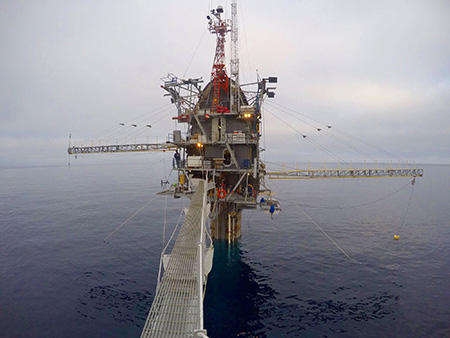 R/P FLIP as seen from the end of one of the boom arms. Photo by Randy Christian.