Photo of the Week: Special Delivery

On Wednesday, May 23, the U.S. Postal Service unveiled the Sally Ride Forever stamp at UC San Diego in honor of the trailblazing NASA astronaut, physicist, and educator. Sally Ride made history and captured the nation’s imagination when, blasting off aboard Space Shuttle Challenger in 1983, she became the first American woman in space. At the age of 32, she was also the youngest American in space.

Ride flew a second time aboard Challenger in 1984. After retiring from NASA, Ride joined the UC San Diego faculty in 1989 and served as a professor of physics until her death in 2012.

An invite-only Women in Leadership event followed the ceremony, with King and Ochoa joining Condoleezza Rice, 66th U.S. Secretary of State and a close friend of Ride’s, in a candid panel discussion about how women can help lead our nation to a better future. Journalist and author Lynn Sherr, a close friend and biographer of Ride, served as moderator. 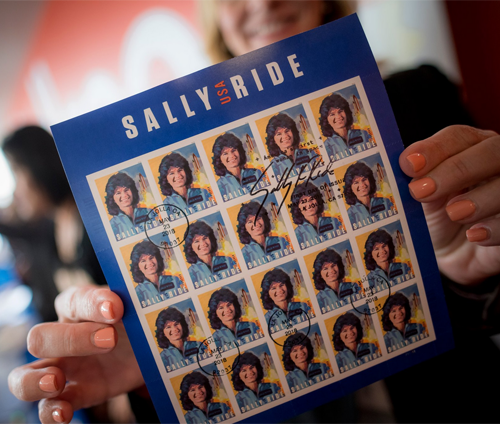 Ride’s legacy lives on through Sally Ride Science, the educational company she helped found to motivate young people—particularly girls—to become literate in science, technology, engineering, and math and to consider pursuing careers in these fields.

In 2016, the U.S. Navy commissioned a research vessel named for Ride in honor of her legacy of bold innovation and exploration. R/V Sally Ride is operated by Scripps Institution of Oceanography and has conducted scientific research missions in the California Current, the Channel Islands, the Gulf of Alaska, and elsewhere.

Sally Ride Forever stamps are now available for purchased at any USPS post office or through its website.