Researchers Find New Reason Why Arctic is Warming So Fast

The Arctic has experienced the warming effects of global climate change faster than any other region on the planet.  Current and former scientists at Scripps Institution of Oceanography at the University of California San Diego have developed a new theory aided by computer simulations and observations that helps explain why this occurs.

A team led by Scripps Oceanography graduate student Emma Beer observed the changes taking place within the Arctic Ocean, which is largely covered by sea ice for most of the year. There, an unusual situation exists where the water is warm at depth and cold near the surface. The deeper waters are fed by the relatively warm Pacific and Atlantic Oceans, whereas the near-surface waters are in contact with the sea ice and remain close to the freezing point. Heat flows upward from the warmer water to the colder water.

The scientists found that the deeper water is getting still warmer as a consequence of climate change, but the near-surface water below the sea ice remains close to the freezing point. The increasing difference in temperature leads to a greater upward flow of heat. Beer, Scripps climate scientist Ian Eisenman, and former Scripps postdoctoral researcher Till Wagner estimate that this phenomenon is responsible for about 20 percent of the amplification of global warming that occurs in the Arctic.

“Global climate model projections of the amplification of Arctic warming vary widely across current models,” said Beer. “What we do here is try to understand one process contributing to this phenomenon as a step to help better constrain future projections.”

The Arctic amplification of global warming has long been observed, and scientists have previously attributed it to several causes including the melting of sea ice. As the bright white ice disappears for longer periods of the year, the dark surface waters beneath it absorb sunlight rather than reflecting it back to space as the ice does. This phenomenon is called the ice-albedo feedback. 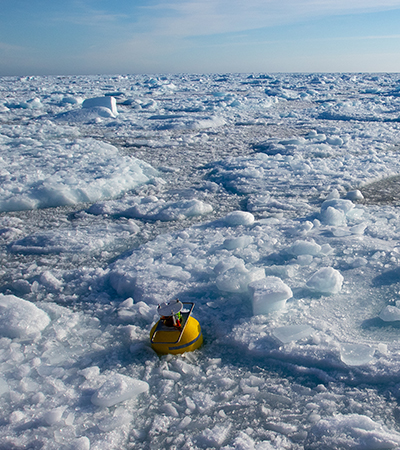 “While previous work has found mechanisms related to the surface and the atmosphere that cause Arctic amplification, our finding is that there is also a fundamental reason why the ocean causes polar amplification when the polar region is covered with sea ice,”  Eisenman said of the National Science Foundation-supported study.

This finding from researchers affiliated with the Scripps Polar Center was inspired by direct observations made by oceanographers at Scripps Oceanography and elsewhere during recent expeditions to the Arctic Ocean. The 2015 ArcticMix and 2018 SODA cruises to the Arctic Ocean revealed evidence that the body of water is becoming more turbulent as sea ice diminishes. That lets warm water from other oceans interact more easily with cold surface waters.

It is also one among a number of new studies characterizing the Arctic warming trend. In January, Scripps Oceanography climate modeler Mark England was part of a team that quantified for the first time how much chlorofluorocarbons (CFCs) have also influenced acceleration of the Arctic warming trend. The influence is expected to decline since measures to phase out CFC use began in 1989.

Wagner is now a researcher at the University of North Carolina in Wilmington, N.C.  The National Science Foundation-funded study appears Feb. 28 in the journal Geophysical Research Letters.