The research could aid in the synthesis of compounds at the base of biochemicals that help society transition away from fossil fuels.

Hook took honors in SANDSWA’s “Best Institutional Writing” award for 2021 for the story “Revealing the Secrets of Seaweeds.” 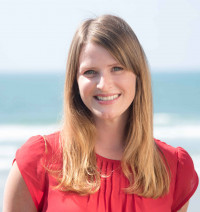 “It’s an honor to share the incredible research happening at Scripps through my job as a science communicator, and I’m delighted to receive this award from SANDSWA,” said Hook, who also produced a video on the research. “Not only are seaweeds a fascinating subject to cover, but I was able to join the Moore Lab on a field outing, where I was further inspired by the group’s collaborative spirit.”

Hook and other award recipients were honored by SANDSWA on Aug. 20. SANDSWA has existed as an association of San Diego-area science writers since the 1980s. It relaunched in its current form in 2018.

The Scripps Oceanography newsletter explorations now began its existence as a quarterly print science magazine for Birch Aquarium at Scripps season pass-holders in 1994. The newsletter is now free to the public and reaches an audience of nearly 25,000 subscribers worldwide. New users can subscribe to the newsletter at this link.