The Shrimp That Isn't

Las Vegas is known for extravagance, a land of plenty in the middle of the Nevada desert. Yet for all the casino glitz and spectacle, nowhere is the indulgence more on display than the legendary all-you-can-eat seafood buffet, filled to the brim with lobster galore and big, juicy shrimp on sparkling beds of ice.

Dominique Barnes, MAS ’14, a Las Vegas native, grew up wondering how such a thing was possible: How there could be such quantities of seafood in the middle of the desert? From a young age she was fascinated by the ocean and set her future sights on marine biology, even landing a gig as a shark biologist in downtown Las Vegas, of all places. “Yet that role wasn’t fulfilling because it didn’t have the conservation component,” she says, explaining why she then applied to Scripps Institution of Oceanography.

One acceptance letter later, she found herself on the coast, learning about ocean ecology and working on research vessels. But it was one class about phycology—the study of algae—that captivated Barnes, given the enormous potential algae had to drive change in countless avenues. “Between food, fuel and even clothing—it convinced me that algae could really save the world in one way or another,” she says.

While a student, Barnes channeled her passion for algae into a business she dubbed Algae Press, an educational and artistic program that introduced elementary and middle school students to algae and its vital role in ecology. The project was bolstered by participating in the TriNet Challenge, an interdisciplinary competition to promote the success of social innovations that impact the environment.

Meanwhile, Barnes’ academic interests culminated in a research project on the Olympia oyster, a West Coast native with a multitude of ecological benefits. Once a delicacy, its prevalence dwindled in the late 1800s due to overfishing and pollution. Yet Barnes was thrilled to learn that the mollusk had recently been seen to grow naturally at commercial aquafarms along the coast, and she anticipated a possible comeback for the once-forgotten oyster. Her excitement grew further when she spoke to local chefs and discovered a community enthusiastic about using more sustainable options from the sea.

These revelations on sustainable seafood would eventually collide with her love for algae in the form of New Wave Foods—a company on the forefront of sustainable seafood alternatives. In the fall of 2015, Barnes partnered with engineer Michelle Wolf to launch the business, after being accepted to develop plant-based seafood alternatives at Indie Bio, the world’s largest biotech accelerator. The pair started off with an attempt to make an imitation shark fin, in efforts to curb the brutal and wasteful harvesting practices for that dish. But Barnes and her team soon realized that targeting a smaller animal could have a much bigger impact. “Shrimp is the favorite,” she says, “Americans love shrimp, as do many other cultures. It’s the most consumed seafood on the planet, and among the most damaging. The current supply chain behind shrimp is horrific—not a lot of people are aware of that.” 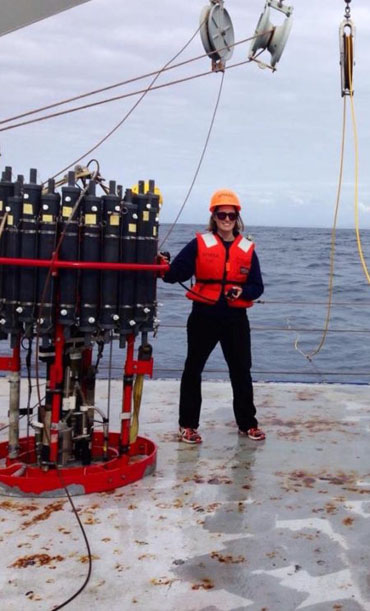 With issues that range from slave labor to ecosystem devastation, the shrimping industry was prime for disruption—and Barnes aimed to take out the shrimp entirely. New Wave Foods focused on using red algae (a key part of a shrimp’s diet) and dedicated itself to perfecting a taste and texture that could pass for the real thing. In the two years since starting up, New Wave Foods has begun commercially manufacturing their shrimp, producing about 3,000 pounds of product every month and providing it to food service operators across California and Nevada.

The shrimp has since found high-profile customers around New Wave’s Bay Area headquarters; it’s served in Google’s cafeterias and continues to pique the interest of chefs from fine restaurants and resorts, all the way to food trucks. “If we can get chefs to promote these much more sustainable alternatives like shrimp made from plants and algae, that can easily trickle down into our broader food systems,” Barnes says.

Effecting such a sea change in seafood does not come easily, however. Aside from developing the product and the crash course in food science and entrepreneurship, Barnes’ biggest challenge now is a demand for the product that’s higher than her company’s capacity to produce. A good problem for any startup company, Barnes thinks, and one she’s excited to tackle. “I don’t exactly get up in the morning excited to grind through price points and balance sheets,” she says. “But what really excites me is the potential impact that we’re going to have. That’s what’s always driven me: impact.”

There’s lots in store for the future of New Wave Foods, starting with nationwide distribution of the shrimp and availability to consumers in grocery stores. Eventually, Barnes hopes to expand New Wave’s product offering with other plant- and algae-based seafood alternatives, producing other shellfish as well as fin fish like tuna and salmon. “I always joke that my dream is to go back to Las Vegas someday and see an all-you-can-eat seafood buffet made entirely from New Wave Foods,” Barnes says. “It seems a little out there, but it’s entirely possible.”