About the Marine Vertebrate Collection

the collection is Now open for Loans and visitors and tours, in accordance with safety policies from UCSD and the State of California.

The Marine Vertebrate Collection of Scripps Institution of Oceanography (ASIH Collection Code: SIO) maintains approximately two million alcohol-preserved specimens in over 120,000 lots, representing more than 5,700 species of fishes. The majority of our collection is formalin-fixed and stored in 50% ISOPROPANOL.

The Collection maintains worldwide holdings of deep-sea and pelagic fishes as well as extensive holdings of shore fishes from the entire eastern Pacific. The Collection includes primary types (holotypes) of over 200 species (type catalog), skeletal preparations (both dried and cleared-and-stained) for over 1,000 species (osteology catalog), otoliths from approximately 1,100 species (otolith collection), and tissues for DNA (in 95% ethanol) from over 1,200 species.

The Marine Vertebrate Collection supports scientific research by providing specimens for studies on the taxonomy, evolution, and ecology of fishes. Specimens are available for examination at Scripps and for loan to researchers at recognized institutions (loan policy).

The Marine Vertebrate Collection also plays an integral role in the support of graduate courses and research at Scripps.

Collection Manager Ben Frable and Russian Ichthyologist Dr. Artem Prokofiev described a new species of the dragonfish genus Photonectes from off Oahu, Hawaii. They named it in honor of recently passed former Collection Manager and expert in mid-water fishes. Over her career, Cindy described almost a third of all known Photonectes species and was the expert in the group as well as other dragonfishes and lanternfishes. She and Dr. Prokofiev were intending a major revision of the genus and to describe this species collected off Oahu in 1971. Cindy realized this was likely undescribed in 1997. 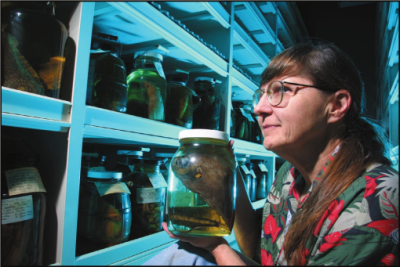 A New Species of Photonectes from the Pacific Ocean off Oahu, Hawaii with a Revised Identification Key for the Genus (Teleostei: Stomiidae: Melanostomiinae)

In July 2021, Zachary Gold and colleagues, including Collection Manager Ben Frable and Emeritus Collection Manager HJ Walker Jr., published a metabarcoding library of genetic samples for 92.7% of the 763 common coastal fishes of the California Current ecosystem. This database will provide researchers and conservationists a highly validated tool for identifying local species from tissue and eDNA.

In Feburary 2021, Curator Dr. Phil Hastings described a new species of chaenopsid blenny, Coralliozetus claustus, from the Islas del Cocos, Costa Rica. Named the Pandemic Blenny as Dr. Hastings described it when sequestered in his home during the start of the COVID-19 pandemic. This species in the second endemic chaenopsid to the remote eastern Pacific Islas del Coco and the twelfth endemic cryptobenthic fish species.

The Scripps Institution of Oceanography Marine Vertebrates Collection began with a small collection of fishes accumulated by the Curator of the Scripps Aquarium, Percy S. Barnhart. These were on display for visitors in the museum portion of the combined Library-Museum Building. In 1944, Carl Hubbs accepted a faculty appointment at SIO and arrived in October of that year. He began actively collecting fishes from the southern California region and the collection grew rapidly. In 1948, the Marine Life Research Program, which focused on the California Current, also provided numerous samples of pelagic and oceanic fishes from the region. In the early 1950s, significant numbers of midwater fishes were added to the Collection when the SIO fleet was making heavy use of the newly developed Isaacs-Kidd Midwater Trawl.

During its early years, the collection was cared for mainly by Hubbs’ graduate students including Boyd Walker and Ken Norris.  Hubbs had been lobbying the Director of SIO for a curatorial position for a number of years. Finally in 1958, Richard H. Rosenblatt was appointed as Curator of Fishes. Soon after his arrival space was provided for the Collection in Ritter Hall. Under Rosenblatt’s care the Collection continued to grow as pelagic, midwater, and deep-sea specimens from around the world were added. Rosenblatt and Hubbs also made numerous collections of shore fishes from the tropical eastern Pacific, especially Mexico and Panama.

The collection occupied most of the ground floor of one wing of Ritter Hall until the fall of 1999 when it was moved to Vaughan Hall, a replacement building for the aging Ritter Hall. Although floor space in the new facility is similar to that in Ritter Hall, funds provided by the National Science Foundation were used to install compactor shelving, greatly increasing the space available for specimen storage.  In that same year, Philip Hastings was hired as Curator of Fishes. Richard Rosenblatt became Curator Emeritus in January 2000, and H.J. Walker and Cynthia Klepadlo continue as Collection Managers until their retirements. Ben Frable became Collection Manager in 2016. 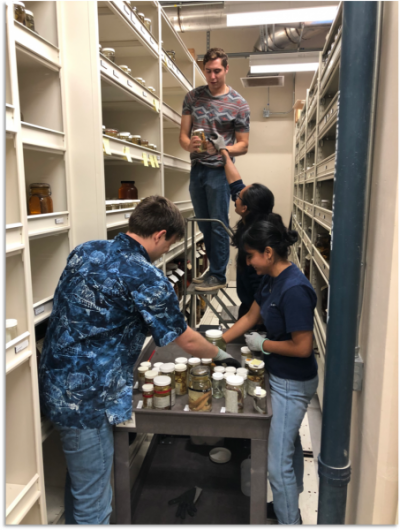 In 2014, the UCLA Department of Ecology and Evolutionary Biology decided to relinquish its remaining Ichthyological Collection to SIO. The collection includes around 9000 lots accumulated primarily under Dr. Boyd Walker (1949-1980) and later Dr. Don Buth (1980-present). All specimens are stored in 40-45% isopropyl alcohol. The majority of the specimens are from extensive surveys of coastal fishes of central and southern California, Baja California and the Gulf of California, and throughout the Tropical Eastern Pacific from the west coast of southern Mexico to Peru, as well as remote oceanic islands such as the Revillagigedos, Clipperton, and the Galápagos. The UCLA collection also contains some fishes from other regions including the Caribbean, central and western Pacific, Indian, and Southern Oceans. Collection dates range from 1886 through 2011, with the majority of sampling occurring between 1948-1970. Due to the ecological interests of the curators, there is substantial metadata associated with collection events, such as site descriptions, lists of aquatic vegetation and non-fish fauna, illustrations and some photographs. The UCLA collection also contains 154 secondary types and 125 species new to SIO. This material has been recataloged at SIO and the data and specimens are now available for research.