What is ocean acidification?

Ocean acidification is the lowering of seawater pH over time, as the ocean absorbs carbon dioxide (CO2) from the atmosphere. The pH scale is used to measure how acidic or basic a water-based solution is. A pH value below 7 indicates an acid; and above 7 indicates a base. While the ocean is still basic or alkaline, scientists have observed that its pH levels are dropping as the ocean absorbs levels of CO2  in the atmosphere that have surged because of fossil fuel use in the past century. The increasing acidity of the ocean could adversely affect some marine organisms. The damage could reverberate throughout marine food webs.

While ocean acidification is a global process driven by CO2 uptake, it is not only influenced by CO2 absorption from the atmosphere. In coastal environments, acidification can also occur through local processes such as freshwater input, upwelling of low pH water, decay of land-derived organic material or dying phytoplankton blooms fueled by fertilizer runoff. In some coastal regions, these local events may worsen the impact of acidification caused by the atmospheric CO2 increase.

How is climate change related to ocean acidification? 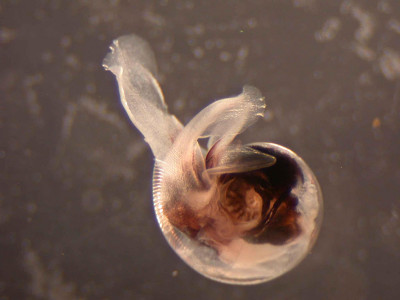 Both climate change and ocean acidification are primarily driven by the release of CO2 into the atmosphere from human activities such as fossil fuel combustion, deforestation, agriculture, and land use practices. Unlike climate change, which refers to changes in Earth’s temperature due to this increased atmospheric CO2, ocean acidification is not directly tied to the warming of the ocean or atmosphere, but rather is a sequence of chemical reactions taking place.

Previously, scientists thought that the ocean’s uptake of CO2 might be a positive force against climate change — as the oceans absorb about one-third of human-produced atmospheric CO2. However, the realization that this CO2 increase is harmful to ocean ecosystems has changed our view of the ocean’s role in this process. Ocean acidification is now an additional consequence of extra CO2 in the atmosphere, with both phenomena working at a pace that some ocean organisms may not be able to adapt to.

How does ocean acidification work?

CO2 enters the ocean through the exchange of gases at the interface of the atmosphere and ocean surface. Once CO2 dissolves in seawater, it starts chemical reactions that release hydrogen ions into the ocean. More importantly for marine organisms, the process removes carbonate ions from seawater because the interaction with carbon dioxide changes their chemical form. Carbonate ions are needed by marine organisms for shell and skeleton growth. Over time, more hydrogen ions and fewer carbonate ions cause the ocean to trend towards acidity.

What are the impacts on marine life from ocean acidification? 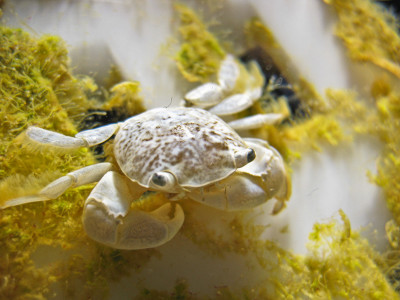 Some marine organisms, such as oysters and corals, need calcium and carbonate — or salt molecules made up of carbon and oxygen — to make their shells and skeletal structures. Carbonate concentrations drop as the oceans acidify, and this drop has been linked to reduced growth and survival of some organisms. Scientists are worried that the consequences of these problems could extend through food webs and threaten coastal ecosystems.

Because these impacts have mainly been documented in laboratories, some extreme natural environments (e.g. volcanic vents), and the geological record, rather than in present day natural habitats, scientists aren’t fully sure of what the ecological consequences of acidification will be, or when they can be detected. Regardless, there is enough evidence to be concerned and that there could be negative consequences for marine industries and humans that rely on marine ecosystems for food.

How do scientists measure ocean acidification?

To understand changes in the open ocean’s acidity over time, a continual, long-term record of pH measurements is necessary. The longest open ocean record of pH started in Bermuda in 1983 by Scripps Oceanography’s Charles David Keeling, which later was merged with the Bermuda Atlantic Time-series Station program (BATS) and accompanied with a similar program in Hawaii (HOT) in the 1990’s. These measurements continue today. To calculate pH, these programs measure dissolved inorganic carbon (DIC) and total alkalinity. DIC is based on the total amount of carbon dioxide in seawater. Total alkalinity is a measurement of the water’s ability to resist change in pH, which depends on the concentration of all alkaline substances, like carbonates, dissolved in the water.

These same measurements are also taken quarterly aboard ships as a part of The California Cooperative Oceanic Fisheries Investigations (CalCOFI) program. CalCOFI collects pH data at selected locations along its research cruise tracks, both in the nearshore and further offshore within the California Current ecosystem. The Ocean Time-series Group at Scripps Institution of Oceanography also collects ocean pH parameters within the California Current. Their data is collected via mooring stations, or devices anchored to the sea floor at fixed locations offshore.

How was ocean acidification first identified?

Since the early 20th century, scientists have understood that seawater chemistry changes with the addition of CO2. In the 1970s, several researchers expanded on this idea by pointing out potential problems for marine life with the accumulation of fossil fuel-produced CO2 in the atmosphere. However, it wasn’t until the 2000s that awareness of the unprecedented speed of present-day ocean acidification became widespread. Concern grew as evidence emerged that the CO2 excess was hindering the growth of calcifying organisms, such as corals. Further experiments within laboratories validated these concerns but still haven’t been unequivocally detected in the open ocean. This may be because other factors such as light, food and temperature also affect the growth of calcifiers, and it is hard to isolate the effects of individual influences. While scientists know that the rate of anthropogenic CO2 release is likely too rapid for some ocean organisms to keep up with, more studies must be made to understand the underlying mechanisms on how and when ocean ecosystems will respond.

Interview information and FAQs developed by Sky Smith, Science Communication Fellow at the Center for Climate Change Impacts and Adaptation.